Nepal is located in South Asia between Tibet in the north and India in the south. It has an area of 147,516 square kilometers, around 40% the size of Germany. 39% of the 30 million people live below the poverty line of $ 3.20 per person per day (World Bank, 2019). The average age of the population is 21 years. 30% of Nepal’s economic output is provided by the 3 million Nepali who work as guest workers abroad, often under unworthy conditions.

Nepal is located in a seismically active zone, and the Himalayan region in particular is considered to be highly prone to earthquakes. The last time in 2015, major earthquakes left 8,510 fatalities, thousands of injuries and significant property damage that continues to affect infrastructure.

There is a monsoon climate. During the monsoon season, which lasts from June to the beginning of October, sudden and often prolonged storms repeatedly cause floods, flash floods and landslides throughout Nepal.


Geography and geology – a land of extremes

A large part of the Himalayas is in Nepal, including of course Mount Everest, but also seven other of the ten highest mountains on earth. The name “Hima’al-aya” comes from Sanskrit and means “home of the snow”. After the Poles, the approximately 15,000 glaciers of the Himalayas are the largest ice and water reservoir with 3,000 cubic miles.

The country is divided into three geographical zones: The Terai , a narrow stretch of land in southern Nepal, with a tropical climate and fertile soils that were once densely forested.

The low mountain range , a very rugged, steep landscape, which extends up to an altitude of about 2,000 meters. This is where the Kathmandu Valley is located, which has always been home to a large part of Nepal’s population.

And then of course there is the high mountains with its imposing Himalayan main chain. There is a harsh alpine climate here. The higher you climb, the more sparse the vegetation and the longer and harder the winters are. The area is accordingly only sparsely populated. Overall, more than 40% of the country’s area is at an altitude of over 3,000 meters.


Aiming high – a country of records

Because of its unique landscape, flora, fauna and wildlife, Nepal is a Mecca for the global mountaineering and trekker scene.

Mount Everest, also known by some as the “Third Pole”, is shared by Nepal (called “Sagarmata” there) with Tibet (“Chomolangma”). The first to climb Mount Everest on May 29, 1953, were Sir Edmund Hillary and Tenzing Norgay. 25 years later, Reinhold Messner and Peter Habeler reached the summit without oxygen. Those were the days! Two years later, Messner climbed Everest solo, again without oxygen. The Sherpa Kami Rita holds the record for most ascents – he was on the summit 24 times. Nowadays, climbing Everest has become a bucket list affair, thanks to the efforts of the Sherpa, who prepare the way to the summit, provide the oxygen, carry the loads and take care of the mountain. This has nothing to do with the above services. Every year in May there is a rush on the highest mountain in the world, which ends in a traffic jam to the summit. This has already caused many unnecessary deaths, over 300 people have lost their lives there in 8400 ascents. Unfortunately, the mountain is left behind as the highest garbage dump in the world. The base camp at 5400 meters gets bigger with every season. At the same time, the government earns a lot of money with the “permits”, $ 11,000 per capita is due.

The species-rich fauna also attracts visitors. The Indian rhinoceros, wild elephants, monkeys, snakes, the Bengal tiger, the red panda, the yak and the snow leopard are native to Nepal, as is the world’s largest moth, the atlas moth. According to legend, the Yeti too. The ornithologists delight around 870 species of birds, over 360 different orchids and almost 6000 species of flowers make Nepal’s biodiversity shine. 19% of the land is protected or national park. And the cow is holy nationwide. 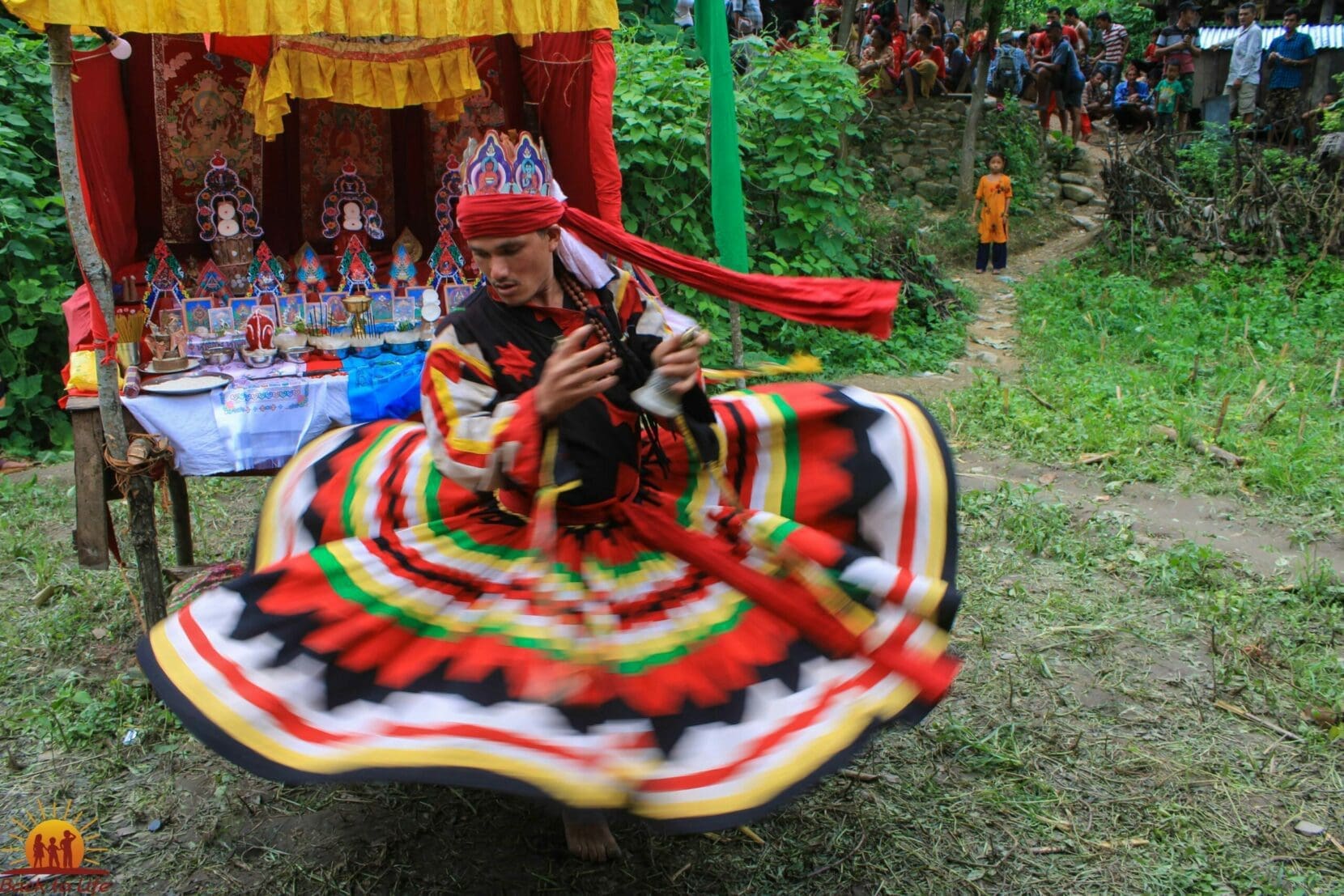 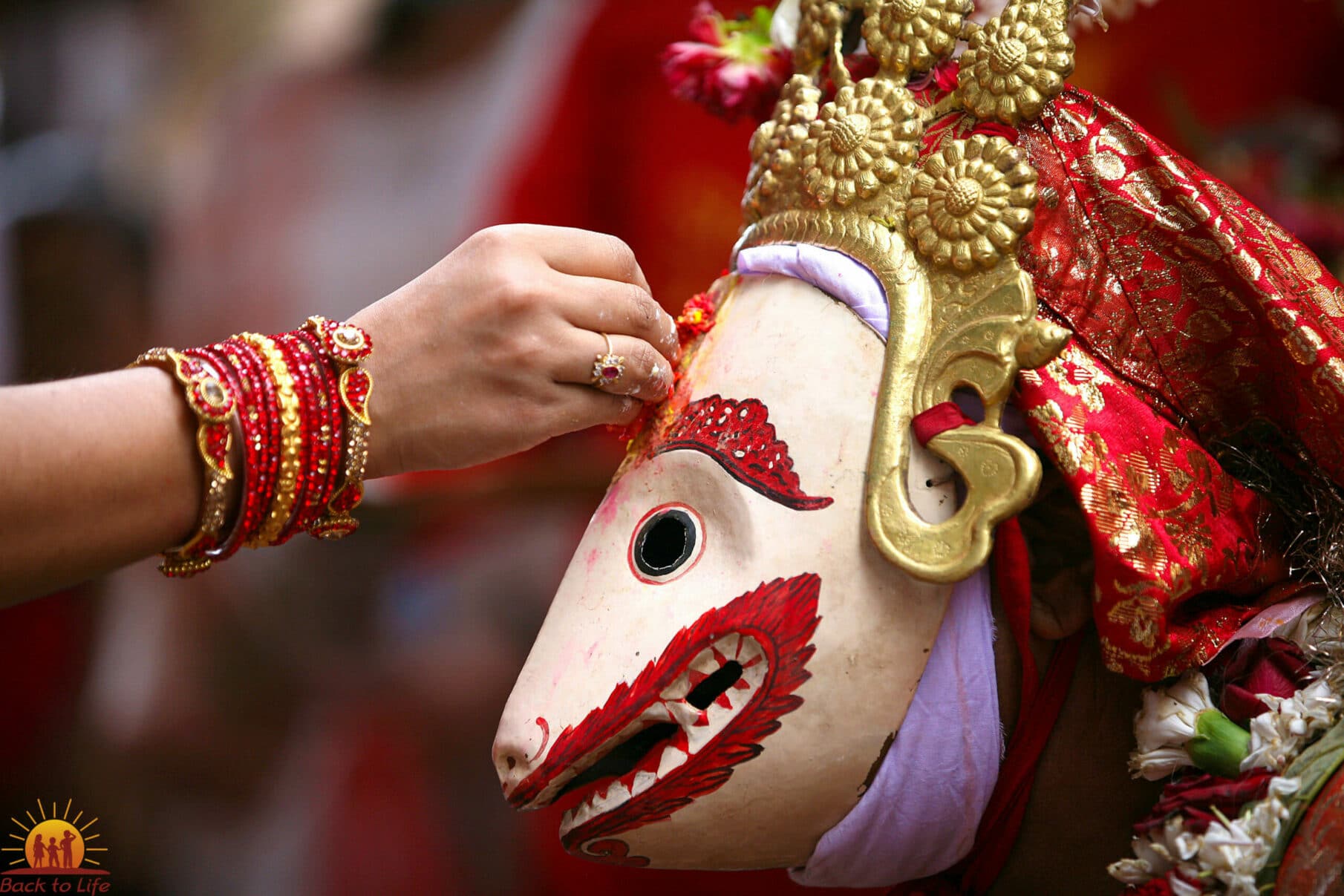 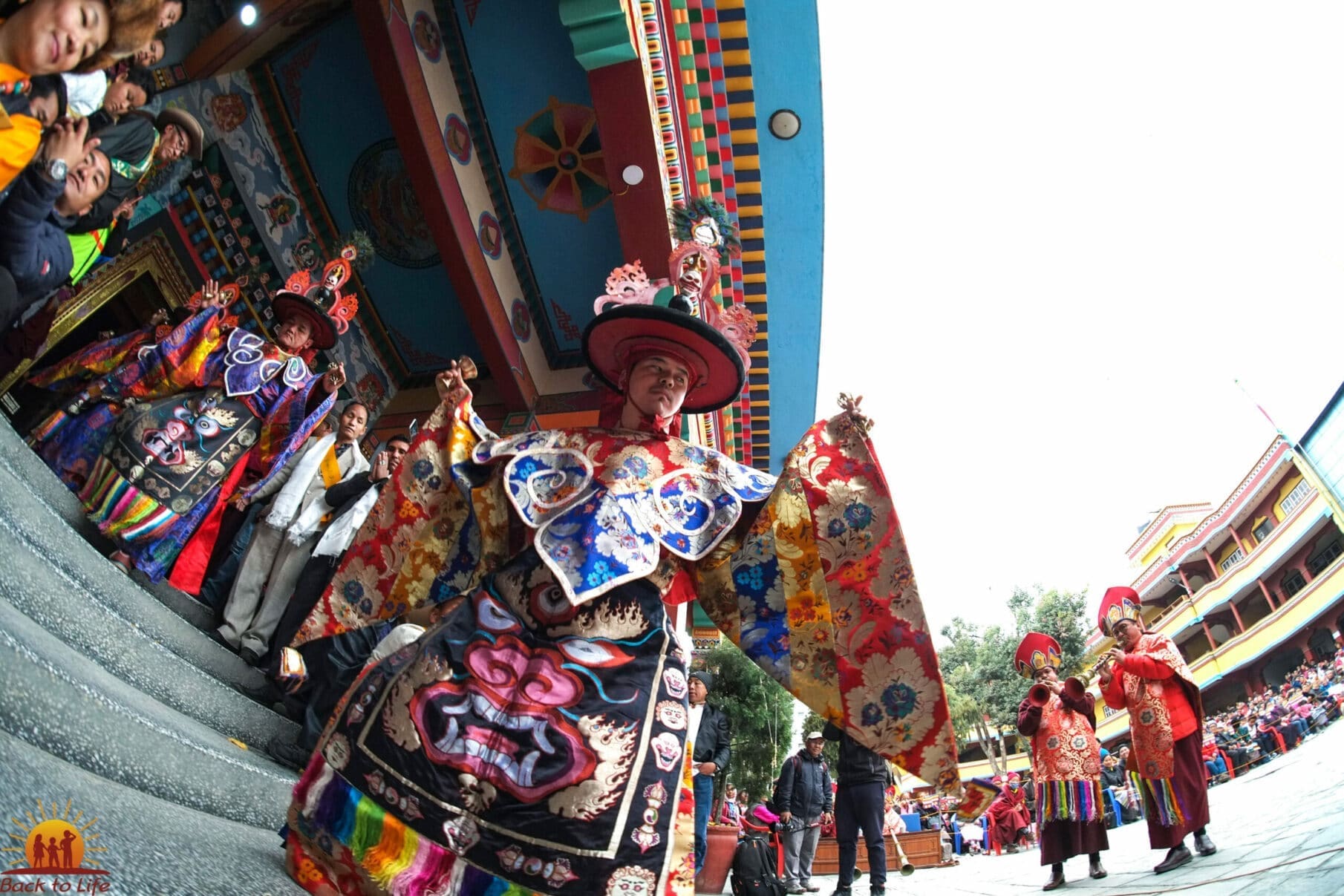 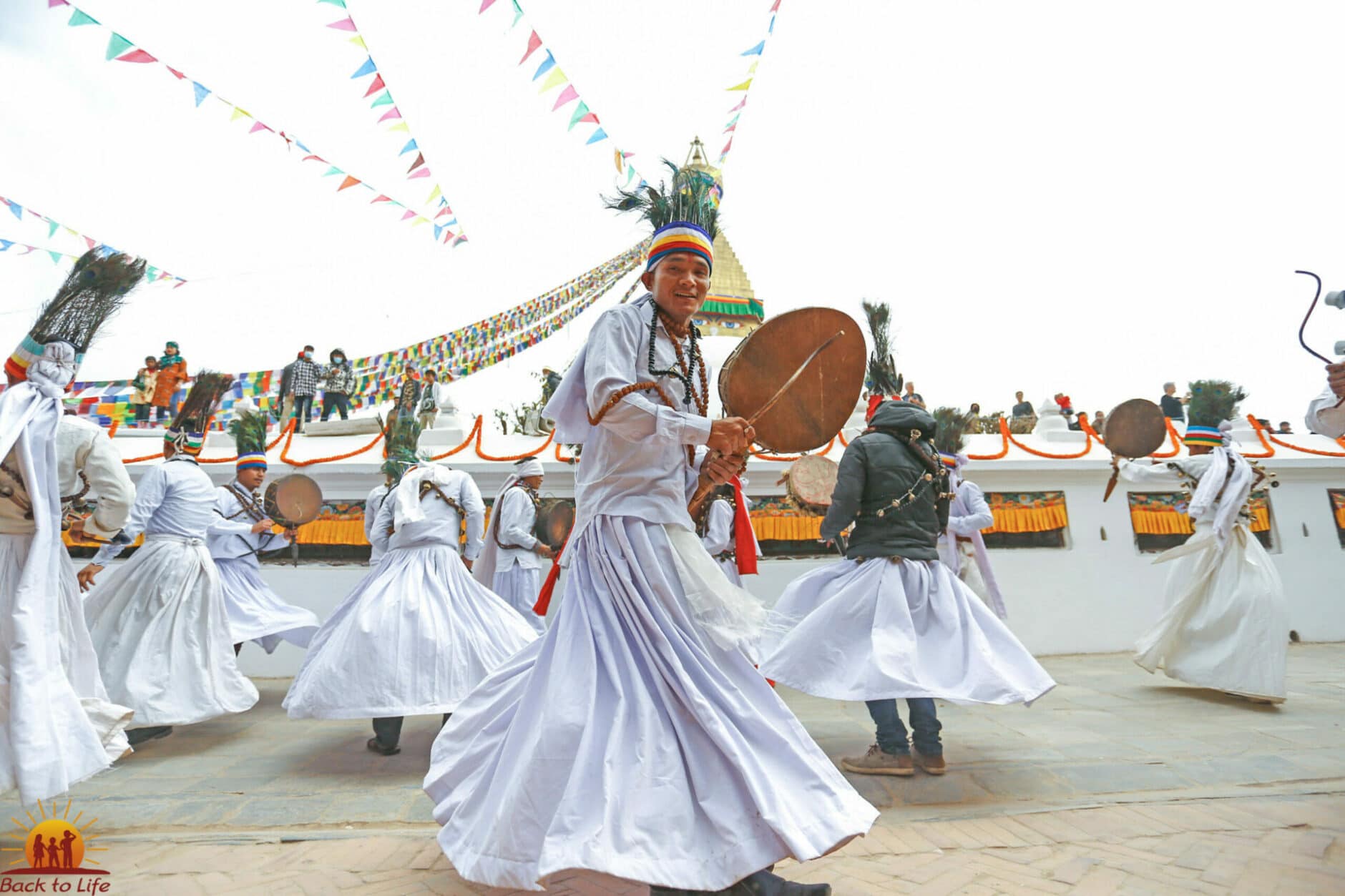 The country’s cultural and ethnic diversity is also enormous. In total there are more than 100 different ethnic groups that communicate in 123 languages and dialects. Due to the long isolation of Nepal, many unique religious, ritual and cultural traditions have developed. In addition, Nepal has always been strongly influenced by both Hinduism and Buddhism. About 80% of the population are Hindus, about 10% Buddhists. One of the most famous personalities from Nepal is Siddhartha Gautama, revered as “Buddha”. It is said to be around the year 500 BC. In Lumbini, Nepal. But other religions such as Islam and Christianity are also represented in Nepal and coexist peacefully. Nowadays Nepal is a secular state, but the Hindu caste system is still one of the pillars of society. Religious rites and regulations as well as shamanism continue to play an important role in people’s everyday lives. So it is not surprising that Nepal has a rich cultural heritage. Particularly impressive are the countless stupas, temples and pagodas as well as the lavishly celebrated traditional festivals such as Dashain, Gai Jatra, Holi and Diwali (Tihar).

Nepal is one of the oldest countries in the South Asia region and has long been ruled by Hindu princes and Tibetan royalty. From there it was a long way to democracy for the small nation, which has fought three times for political change in the last 70 years alone. In 1951, Nepal was liberated from the rule of the oligarchic elite “Ranas”, who had controlled the country for more than 100 years. To this end, revolutionary groups from the population allied with the royal family and restored the authority of King Tribhuwan. This time, however, in the form of a constitutional monarchy, in which the people should be represented by a democratically elected parliament. After the early death of King Tribhuwan in 1955, his son Mahendra came to power. However, this nipped the young democracy in Nepal in the bud. Without further ado, he suspended the constitution at the time, banned political parties and ruled as sole ruler from 1960. When Mahendra died in 1972, his son Birendra became King of Nepal. Characterized by his education in England, Japan and the USA, King Birendra was open to the coexistence of democratic and monarchical structures. Nonetheless, it took until 1990 for change to take place. In that year, due to a growing democracy movement in the population, the king lifted the ban on political parties and reintroduced the constitutional monarchy with a multi-party system and parliament.

But this system only lasted for a short time. The Communist Party of Nepal, the Maoists, opposed the participation of the monarchs in the government massively. From 1996 to 2006, Nepal was in a bloody civil war that killed nearly 13,000 people. In 2001, King Birendra and other members of the royal family were killed in a brutal massacre, which has not yet been clarified. With Gyanendra (brother of the king) another monarch was crowned, but this failed in the attempt to assert himself against the now allied parties and Maoists. Nationwide strikes, demonstrations and pressure from the international community ultimately led to the official end of the monarchy in Nepal in 2008. The new constitution came into force in 2015. Today the Prime Minister of Nepal heads the executive branch, which is set up by the democratically elected parliament.


Developing country with many challenges and opportunities

Nepal has made a lot of progress over the past few decades. In the last 20 years the number of people living below the poverty line has halved. But it is still one of the poorest countries in the world.

The United Nations count Nepal, together with Eritrea or Afghanistan (among others), to the so-called “Least Developed Countries”. In the annual ranking of the United Nations, which compares the development status of 189 countries, Nepal is in 147th place – Germany, on the other hand, is in 5th place (Human Development Report, 2018).

The government, external actors and civil society are currently focusing on the following development policy issues:

Although the country’s level of development has improved significantly on average, there are clear differences between urban and rural areas, castes and ethnic groups, and between men and women. The Dalits, also known as the “untouchables”, are the most disadvantaged group of the population – they hold the lowest position in the social hierarchy of Nepal, which is still reflected in a lower life expectancy and a lower standard of living.

In particular, the Karnali mountain region, more precisely the Mugu district, which is one of our project regions, is far behind in terms of all development indicators.