The long way to happiness

HAND IN HAND FOR A BETTER LIFE

The screams of the desperate mother tore the silence of the freezing winter night in the Mugu mountains. In no time the neighbors ran together and gathered in front of the Karkis house. What was it that happened? The family’s recently born baby, a young boy and the pride of his parents, screamed with all his might until he suddenly fell silent. When the father stepped outside the door, trembling, the village learned of the tragic accident that had just occurred.

Dangerous poverty
The families in Mugu have no heating, in the evenings the cold creeps through the masonry and only the open fire in the middle of the living room serves as a source of heating, cooking and light. To give the baby a little sleep despite the harsh temperatures, his mother put him on a blanket next to the fireplace and did her housework. The baby rolled over unnoticed and landed unchecked in the blazing flames. In a panic, his mother pulled him out of the fire in a flash. She was just able to save his life, but his head, his right side and especially his right hand were completely burned. He was still breathing very shallowly, but was lying dead in her arms, unconscious from the pain.

The tragedy occurred almost 10 years ago. At that time there was no hospital in Mugu they could turn to, not even for first aid.

The hastily summoned shaman waved him off, saying that he could not treat the burns, that they were too serious. The Karkis knew they had to get to the lowlands as soon as possible, but they did not have the means to provide any medical assistance. The villagers pooled and loaned the Karkis the money to come to Palpa, where there was a clinic for burn victims. Fearful and worried about their son, they embarked on the long and arduous journey with the infant, who had been crying incessantly in pain for days.

Tragic consequences
Jay (also called Jaya) was only six months old and had to stay in the Palpa hospital for many weeks. The doctors tried their best, but could not save the kid’s hand and ended up amputating it.

Back in Mugu, the couple sold the entire property in order to be able to repay at least part of the loaned money to the neighbors and the father went to India to work as a day laborer there – until today. He sends the earned money home to pay off debts and to support the now completely impoverished family. He returns to Mugu once a year to see his family.

Jay, meanwhile, grew up and became an outsider everywhere. The situation of handicapped children high in the mountains, where physical fitness and integrity are particularly important and only the strong survive, is deplorable. Often they are discriminated against and neglected, it starts in their own families and ends in social ostracism by their fellow human beings.

Instead of helping a disabled child grow up and offering them all kinds of assistance, they are constantly being warned that they are unlikely to be able to work well and make a living in the future. As a consequence, many of these children suffer severe emotional damage as well as physical suffering.

Jay was the third child of his parents, the first and only male descendant after his mother had already given birth to two daughters. The Karkis were once so happy about his birth because it is of the utmost importance for Hindus to have at least one son. Only a son is allowed to light the parents’ cremation fire and only then does the soul of the deceased receive redemption. In addition, a male descendant is the guarantor of their retirement benefits. Daughters marry and thus enter their new family. Meanwhile, Jay’s parents feared that he would not be able to afford all that and decided to father another son. But fate brought them a girl again and only the fifth child was a boy again.

Finally care
Our team in Mugu met Jay in 2018. His misfortune and his difficult everyday situation affected us all very much. In his village he was constantly being suggested to be responsible for the poverty of his family and he suffered from feelings of guilt. We immediately decided to support him. Jay didn’t go to school and we accepted him into our Back to Life sponsorship program. To give him a better environment, we enrolled him in a school in Gamgadhi, the small district capital of Mugu. The school also offered overnight accommodation and we hoped he could have a happier life here. Hopefully he would later be able to lead a self-determined life with a good school education. But our plans didn’t work out. In Gamgadhi, too, he was bullied and excluded by his classmates. Nobody wanted to play with him and the children kept teasing him. Since his right hand is amputated, he has to carry out all activities with his left. The left is considered unclean as it is normally used to go to the toilet to clean your buttocks with water. The mountain dwellers do not know toilet paper. You only eat with your right hand. His classmates showed him contempt at every meal because he couldn’t. The bald spot on his head from the burns was also a constant source of ridicule.

Jay kept running away and seeking refuge in our team office in Gamgadhi. So we decided in 2019 to bring him to Kathmandu. Here in the capital of Nepal people are more educated and civilized, life is more modern. 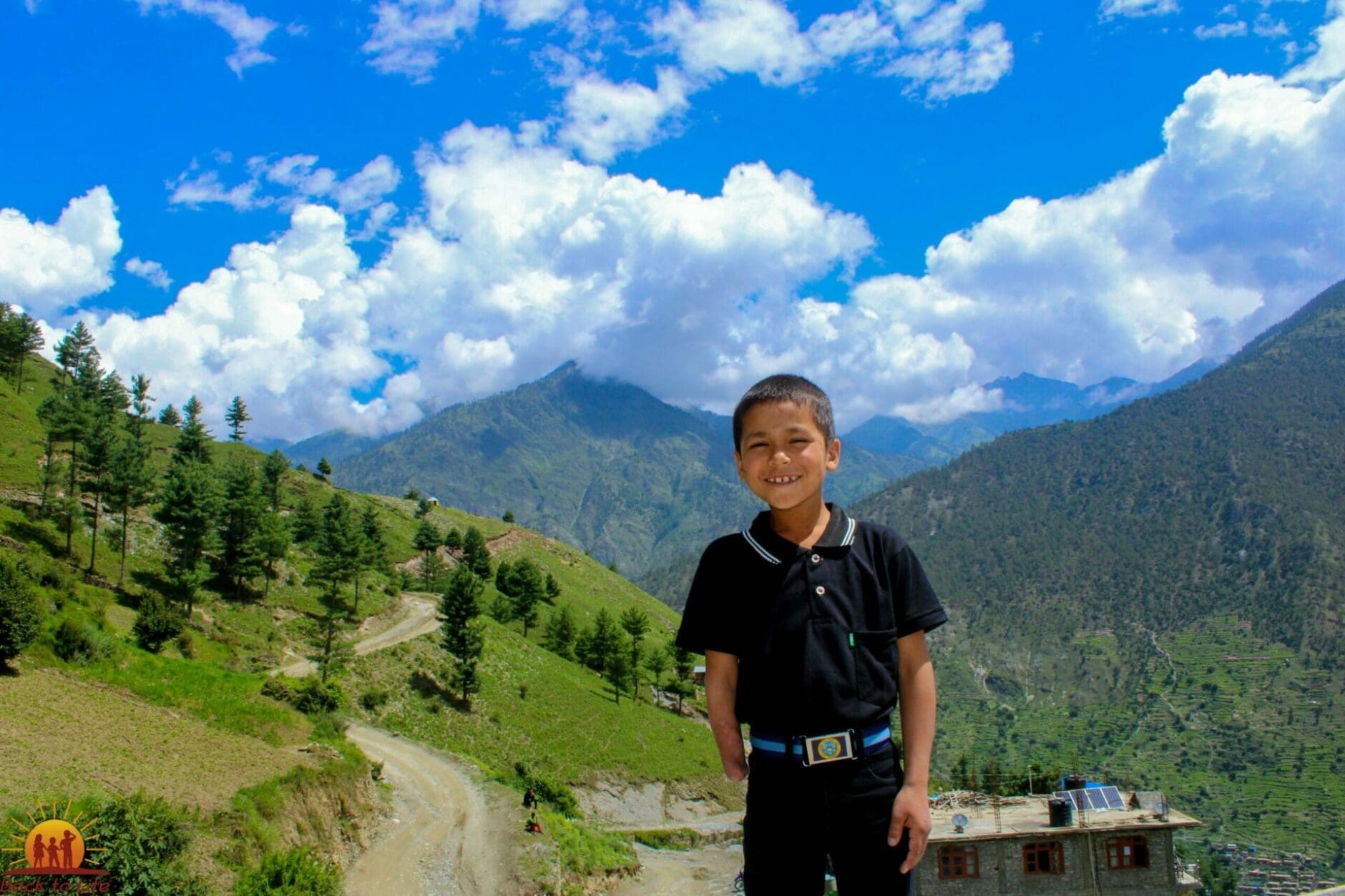 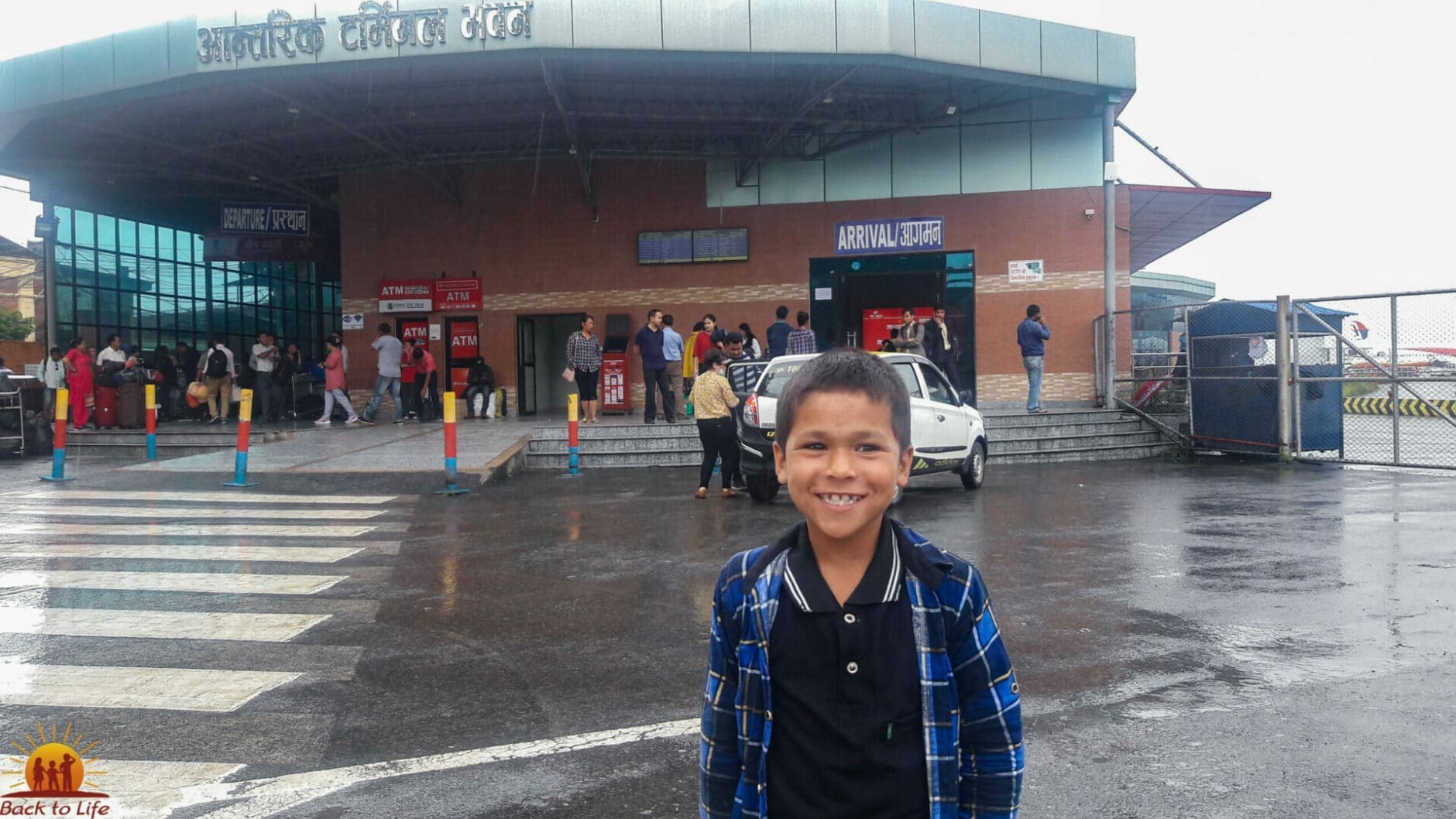 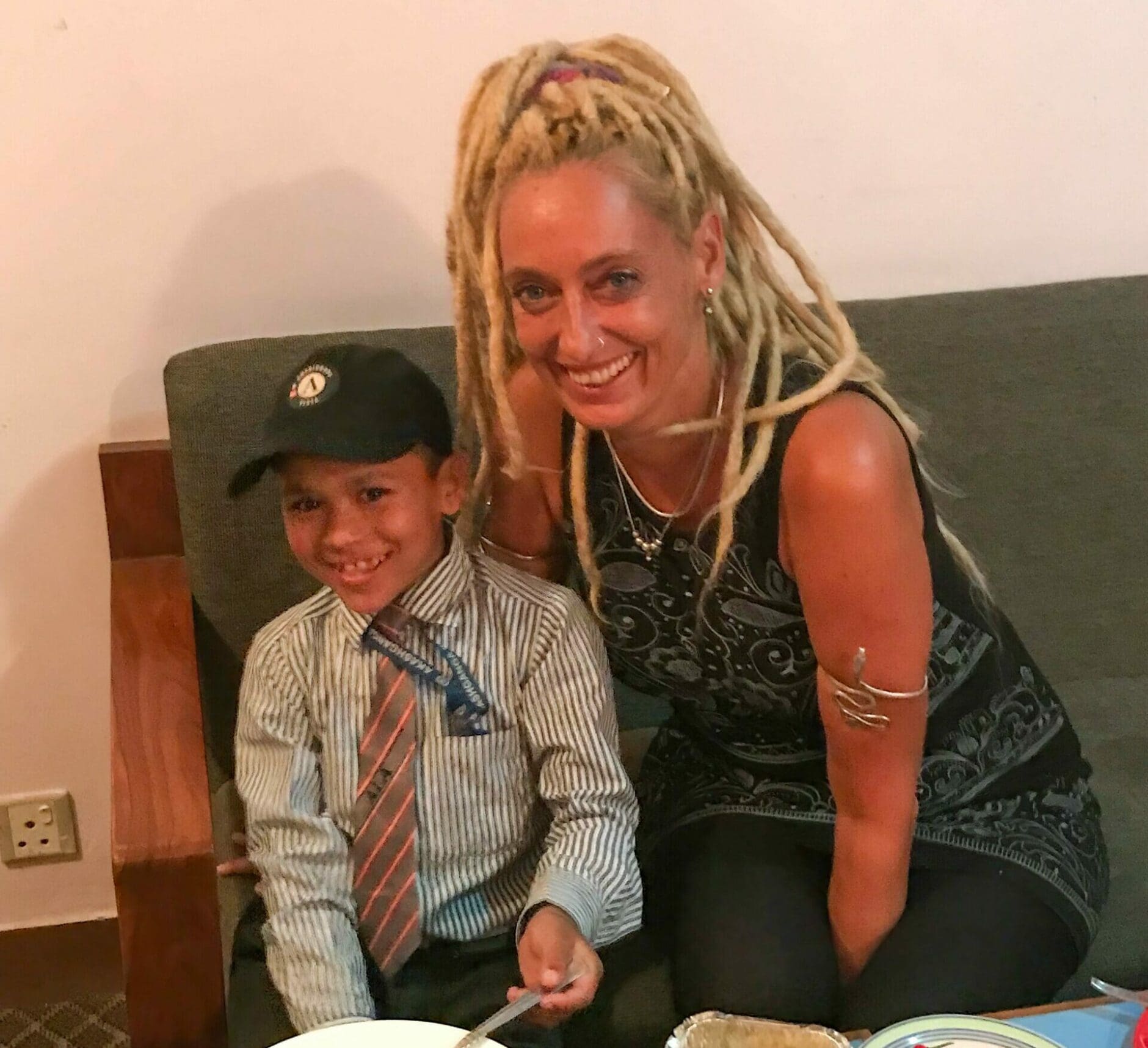 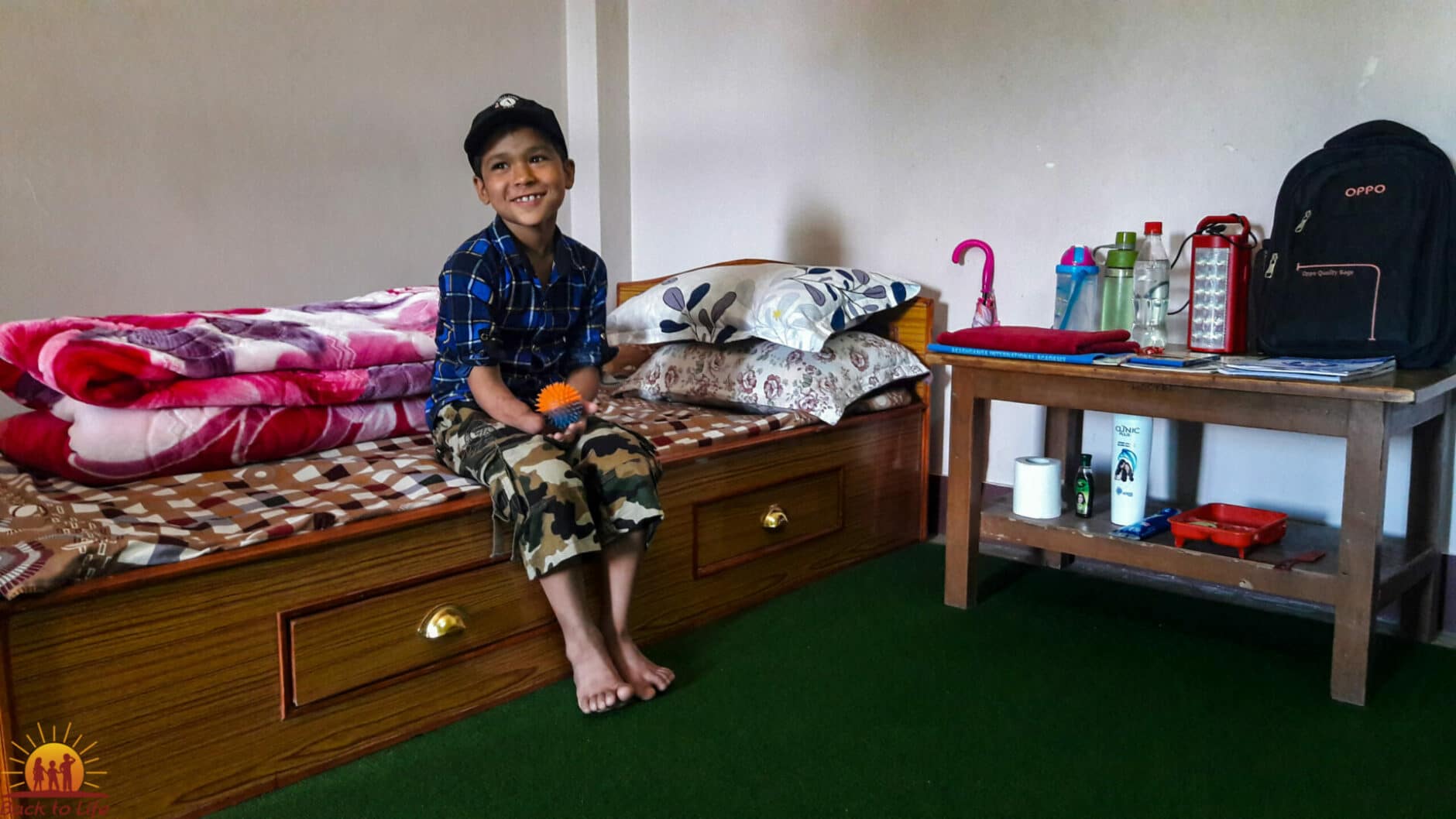 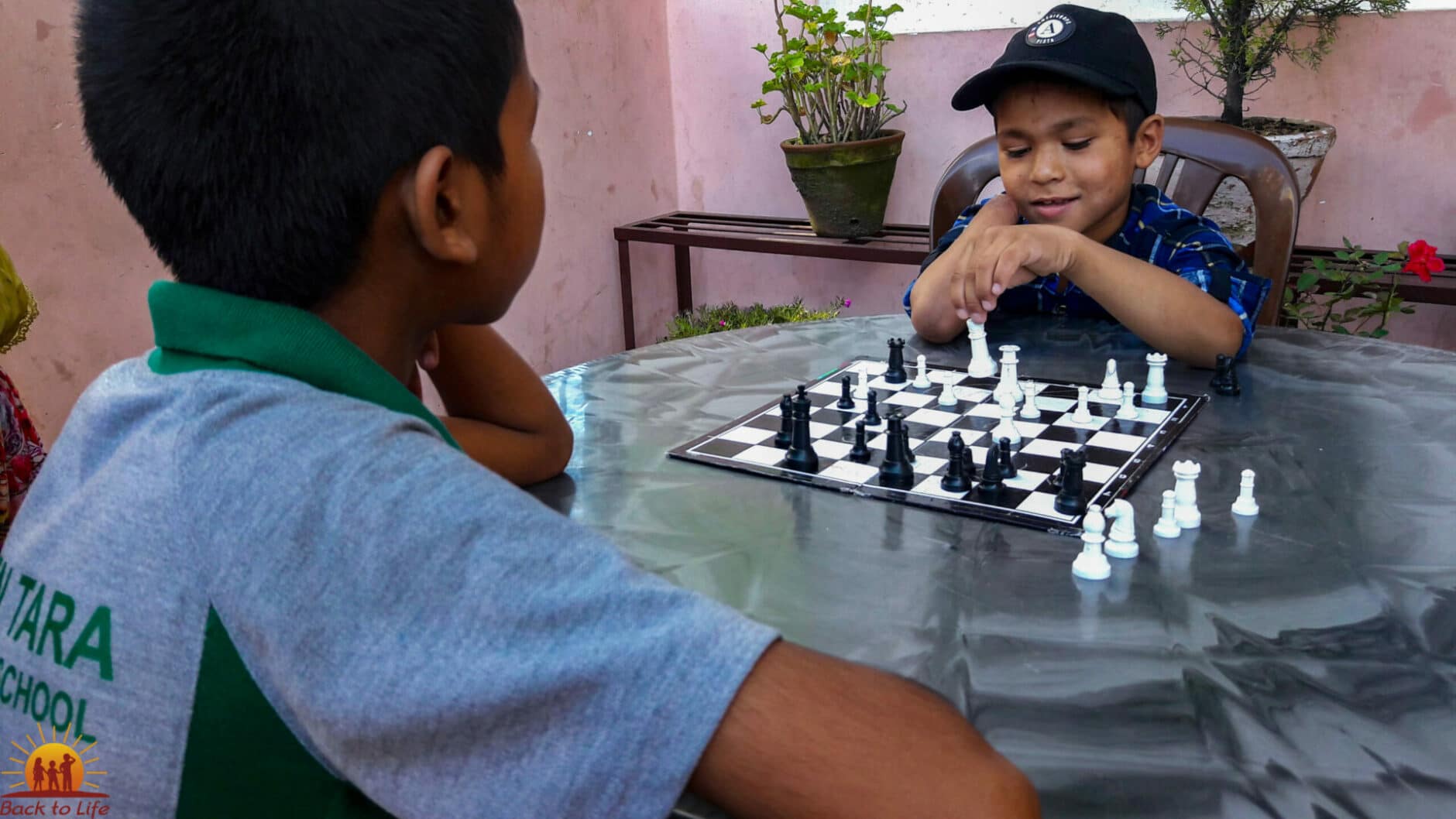 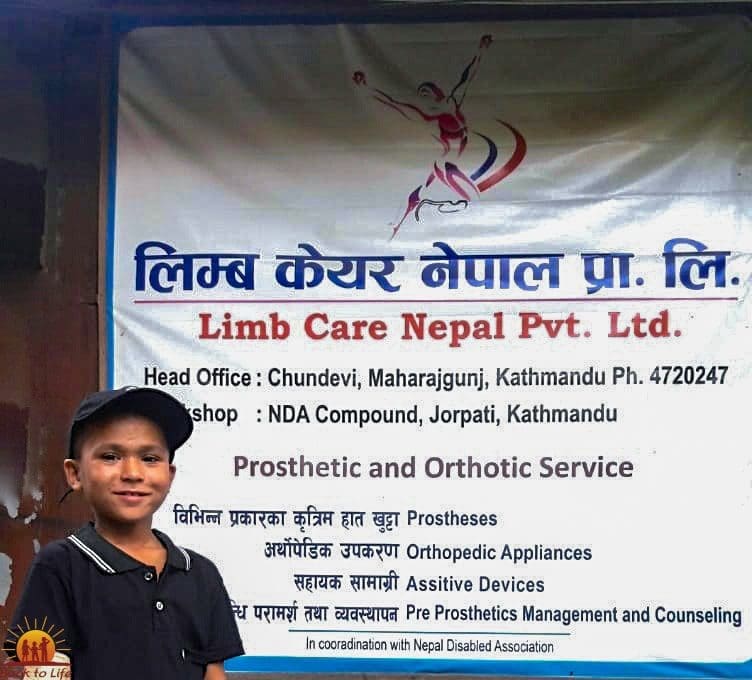 Finally at home
That was the right decision. The eleven-year-old blossomed after just a few days. We enrolled him in a good boarding school, which he really likes and where he really feels comfortable. It’s not just the beautiful and child-friendly environment that is good for him, he has finally found friends among his classmates who even taught him to play football. Here he is no longer an outsider and the relief and happiness about it are written on his face.

Jay is so motivated in class that he has already been able to skip two classes to go to school with his peers. English is new to him, but he is hardworking. His school principal is impressed with Jay’s achievements and his tireless study. When the boy has free time, he prefers to play chess and easily beats his classmates. Jay shares a room in the “Green House” with three other boys. Maybe that’s why his favorite color is green.

A new hand
My team went to a specialized hospital in Kathmandu with Jay to give him a hand prosthesis. It was made and adapted especially for him and was ready after a month. It was an exciting day for Jay, but also for us. The hand prosthesis is well done, it is easy to put on and take off and Jay copes with it without any problems.

Jay is excited about his new life in Kathmandu and we are very touched by how well this boy is developing every day.

Dil, who runs our sponsorships, has been taking care of Jay since he left the mountains. Every day he visits him and lovingly encourages him, looks over his homework and answers Jay’s questions. Dil always has an open ear. He’s there for Jay.

Jay reports himself: “After a year in Kathmandu I came back to Mugu. My mother picked me up at the airport. We stayed overnight in Gamgadhi and started walking to our village very early the next morning. The way was very exhausting. And very far. We arrived after 14 hours of walking. It was already dark by then. My father, my grandparents, my brothers, sisters, uncle and aunt greeted me. Everyone was amazed at my new hand. They never would have thought that she looked so real. I was tired from the long journey. “

When asked how he spent some time in Mugu, Jay replies: “I stayed in my village for 4 months. I often played soccer with the others. Before, they never let me play. Sometimes my mother and I went to the forest to collect firewood. I ate many local foods like roti (bread) made from millet, red rice, and mutton.

But life in the village was different than usual – because of Corona. Jay tells us, “I heard people talking about the pandemic there. I saw masks and soaps being distributed in the village. People wore masks and were not allowed to move from one house to another. I was so bored. I missed my school and home in Kathmandu very much. I have a lot more to do there. “

At the end of July, when the hard lockdown was broken, Jay traveled back to Kathmandu, accompanied by a teammate. He says himself: “Back in Kathmandu I now have regular online lessons for the school. My dream for the future is to become a great teacher. “

With Jay, we can just imagine anything. We have taken him to our hearts and will continue to do everything so that he can develop as best as possible. Hand in hand for a bright future.